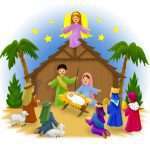 Christmas is a holiday celebrated all around the world. The religious significance of the holiday is the celebration of the birth of Jesus, while the secular festivities involve a gift-giving character who brings presents and treats to good children. As in many holiday celebrations, there are many customs which include decorations, music, and many specialty foods. Let’s take a look at some of the most interesting ways Christmas is celebrated all around the world.

In India Christmas is celebrated on December 25th with church services for believers. A midnight service is very popular. People of all faiths decorate their homes and gardens with star-shaped paper lanterns and some set up nativity scenes. Father Christmas is the one who brings presents to children from a horse and cart. Special Christmas cakes and sweets are baked such as newries and kulkuls and open houses abound.

In Sweden St. Lucia’s day is celebrated on December 13th. St. Lucia was a Christian martyr from 304 AD. She was known for secretly taking food to persecuted Christians in the catacombs of Rome. Today young girls dress in white dresses with a red sash, and wearing a crown of lights to help her find her way. Special Lucia Day buns called Lussekatts are served. Then on Christmas Eve a huge buffet known as julbord is eaten in courses. It begins with cold fish dishes and moves to cold meats. Then, it’s on to warm meat dishes and desserts. Glogg, a sweet mulled wine and coffee favorite drinks. Homes are often decorated with straw to remind everyone that Jesus was born in a manger. Gifts are brought by small gnomes called jultomten.

In Madagascar, an island off the east coast of Africa it is very warm at Christmas time. Still decorations include holly and “snow” even though neither exist there. Here Santa is known as Dadabe Noely and only small gifts are exchanged. In Christmas day people everywhere, even strangers greet one another with “Arahaba tratry ny Noely” which means Merry Christmas and then go to their families to eat dinners of chicken or pork with rice and a special cake. Another favorite Christmas food is the lychee, a fruit which is peeled and eaten with great enjoyment.

In Zimbabwe Christmas day, known as Kisimusi, begins with a church service. Then people visit all of their friends and family and eat and exchange gifts all day long. Favorite meals are chicken with rice which is a special treat. Often large speakers are put into the streets and music is played loudly. People wear their best clothes and homes are decorated with ivy draped around the top of the rooms. Christmas cards may have wild animals on them and small gifts are given to children on Christmas morning.

In New Zealand Christmas also falls in the hot summer months. Families are often celebrating their summer holidays by camping or staying at the beach. There are parades and Christmas trees. The Christmas meal is often barbecued meats or seafood. Desserts such as hot fruit pudding or meringues are served. Pavlova is a favorite dessert. Presents are opened on Christmas day before the special lunch.

In Ethiopia Christmas is celebrated by the Orthodox Church. It is held on January 7th, and called Ganna. People fast on January 6th then on the morning of the 7th they wear a traditional garment called a shamma. It is a thin white cotton toga-like outfit. The shamma is worn to a special service held in the circle-shaped church. Candles are held in a procession and communion is taken. At the time of Ganna men and boys play a game that is similar to hockey also known as ganna. Special foods eaten at this time of year are meat and vegetables called wat and flatbread known as injera. Children usually receive gifts of clothing.

In Iran those celebrating Christmas are primarily Armenian-Iranians known as Parska-Hye. They follow the Oriental Orthodox branch of the church. Christmas trees are decorated, gifts exchanged and a feast follows twenty-five days of fasting from meat, eggs and dairy products. At the feast a chicken barley stew is served known as harrissa.

In Russia Christmas is once again celebrated by the Orthodox Church. Once banned by the communist regime, Christmas is again celebrated with special church services, and wonderful meat and cabbage pies called pirogi and meat dumplings known as pelmeni. A porridge known as kutya is also served along with honey and poppy seeds to bring happiness, success and peace. Children carry a star and go house to house in the cold winter snows singing carols and receiving sweets.